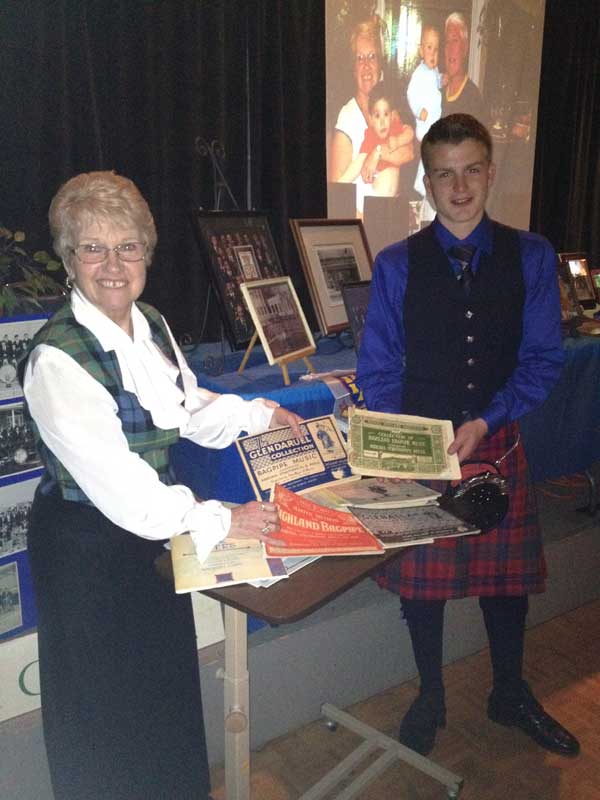 Bruce Gandy's father-in-law, Ronnie Rollo, passed away in late 2011, and one of the initiatives undertaken by the Bruce Gandy Bagpiping Development Society was to find a worthy recipent of the piping library that Ronnie had built over the years, and which he wanted passed forward so that aspiring pipers could make use of it. At his Memorial, A selection of Ronnie's library was passed on to Ontario piper Kyle Coughlin, one of Ontario's rising stars in band and solo piping.

Following the Memorial, the Society received the following letter from Kyle.

To start off, I’d like to extend a sincere thank you to both the Rollo family and the Bruce Gandy Bagpiping Development Society. I was fortunate enough to be given Ron Rollo’s music collection through Bruce’s foundation on May 10, 2012 at the memorial that was held for Ronnie at the Aurora Legion.

I’m am also very happy to have received the collection through the Bruce Gandy Bagpiping Development Society, a great initiative by Bruce who’s goal is “To promote and enhance bagpipe music through educational funding and partnership.” I am very proud to be the first recipient of something from the society. One of Bruce’s goals is to have recipients to apply a “Pay it forward clause” so they can help give back to the piping community. I intend to put this clause into use and help the piping community wherever I can, whether it be by giving free lessons or helping out young pipers around the games when they need a hand, just to name a few.

Ronnie was a great man and someone I was lucky enough to call a friend. I first met Ronnie as a young 13-year-old piper when I played a few tunes for him at a wedding, he always had encouraging words for me and little tips to help improve my playing. I always looked forward to seeing and talking to both Ronnie and June around the games and other piping events.

Ronnie will be missed by everyone; he was a huge part of the piping community and a great family man. I intend to keep his legacy alive with me by putting his books to good use. I though it fitting that the first tune I should learn from his books was June Rollo’s Ronnie from Michael Grey’s book.

A number of people have suggested they'd like to make a regular contribution, so we've set up this subscription option. Want to swap one latte a month for the Foundation? Or maybe a pint? This will allow you to "subscribe" to a monthly amount. You can cancel anytime, and if this isn't for you, we have the regular "donate" button below.

If you would like to contribute to help offset costs associated with the various fundraisers the society runs, and help the fundraising effort, you can send donations via paypal direct to Bruce Gandy where 100% of the donation will be directed toward the Society's Scholarship fund. Thank you.